Another painful aspect of this gaslighting effect as well as the effects of trauma is that we begin to rationalize, deny and minimize the impact of the abuse in an effort to survive a hostile, toxic environment. We essentially begin ‘gaslighting’ ourselves and blaming ourselves for the abuse, though certainly not with the same intent or awareness as our abusers.

I want to emphasize that this is not your fault, but rather a common reaction to enduring and having to survive severe trauma. Here are five ways we rationalize abusive behavior that we can all be more mindful of, moving forward. These are not only relevant to survivors of abuse, but also society as a whole to remember, in order to combat victim-blaming.

1. “Well, I am not perfect either.” A popular misconception is that one has to be perfect in order to gain respect and decency. There is no excuse for any form of abuse, period. If you are a non-abusive person who is capable of empathy, there is especially no excuse for a person to verbally, emotionally, or physically violate you in any way, regardless of your flaws.

Many survivors of abuse have been accused of being too sensitive, too clingy, too much of everything – this has caused them to excessively look inward for someone to blame rather than seeing the true culprit. The abuser works very hard to implant false insecurities as well as exaggerate existing ones; they continually blameshift to make everything the victim’s fault. There are plenty of imperfect people in the world who have loving partners, friends and family members. These people don’t have to meet some fictitious criteria for perfection to be worthy of respect and decency. Neither should you.

If you don’t quite believe this yet, think about the most caring, empathic person you know who has ended up in a toxic relationship with an abuser. Didn’t that same abuser still reap the benefits of having such a wonderful partner? Why is it that an abuser gets to be with such a warm, loving person and you, a nonabusive, albeit imperfect person, has to settle for abuse? The truth is, you don’t. No one is perfect – and considering your abuser is probably condescending, filled with rage, contempt and a lack of empathy, he or she is especially not one to talk about imperfection.

2. “Now he/she is being sweet. They’re back to normal.” Don’t mistake saccharine sweetness for authentic change. There is a difference between a non-abusive person taking responsibility and an abusive one who lacks empathy; the latter often takes responsibility without making any concrete changes. If a loved one who has otherwise been respectful has done something wrong that is out of character, has taken responsibility and worked to repair the relationship, this is different than the abuse cycle with an abuser who is unwilling to change.

A person who has empathy and can take accountability for their actions is not normally unpredictable; they are fairly consistent in their behavior. They don’t go out of their way to manipulate, berate and demean you at every and any opportunity. They can place themselves in your shoes and understand the rules of basic decency and respect. Abusers undermine these very rules by acting as if ‘respect’ is a relative term that can be reframed to suit their own agenda.

Consider that the abuser’s ‘normal’ is not the kind, charming person they presented in the beginning of the relationship – the ‘normal’ in an abusive relationship is the unpredictable, hurtful person who leaves you walking on eggshells, has no problem prioritizing their comfort over your pain, and regularly gains pleasure from controlling and demeaning you.

The abuse cycle relies on hot and cold, mean and sweet behavior, which means nice actions after an abusive incident cannot be taken at face value, but rather as embedded in a chronic pattern of behavior. According to domestic violence specialist, Dr. Clare Murphy, ‘Jekyll and Hyde’ abusers deliberately switch masks at the drop of a hat to simultaneously punish and comfort you. This cycle of intermittent emotional battery and resolution keeps us traumatically and biochemically bonded to them.

The abuser knows you will use this rationalization to excuse his or her abusive behavior, so they ensure that their apologies, pity ploys, or their ability to revert back to the false self make you second-guess your perceptions so they can win you over once again. It’s all a ploy to get you back into the abuse cycle so they can mistreat you all over again.  Remember to keep in mind all of the abuser’s actions up until this point, before you begin feeding into false hopes. Documenting and writing down accounts of the abuse can be helpful in keeping you grounded about what has occurred.

3. “They reached out to me after I set boundaries, so that must mean they miss me.” A recent study revealed that narcissistic exes are likely to reconnect with their past partners for convenience and pleasure, not because they miss them or truly want them back in their lives. When an abuser reaches out to a survivor after the relationship has already ended, this is known as “hoovering,” where, like a Hoover vacuum, the abuser attempts to suck the victim back into the traumatic vortex of the relationship. In “The Hoover Maneuver: The Dirty Secret of Emotional Abuse,” therapist Andrea Schneider, LCSW notes that for abusers, hoovering enables the abuser to regain control over the status quo of the relationship.

For malignant narcissists, hoovering is not about the fact that they miss their former victims who they once devalued – it’s about re-idealizing past flames so they can continue to keep them as permanent members of their harem for whenever they’re lacking in narcissistic supply. When you’re being hoovered, you’re essentially being manipulated, not missed or pined for.

4. “They’re just under a lot of stress.” Think about a time when your abuser was very stressed – whether at work or due to other extenuating circumstances. Did they lash out at people like their boss, their harem members or at complete strangers? Did they make a scene in public and humiliate themselves? Did they risk losing their jobs, their public reputation or the shallow friendships with people who believed in their facade due to their seemingly ‘uncontrollable’ rage?

Or did they come home to you and use you as an emotional (or even physical) punching bag behind closed doors? If you were involved with a covert narcissistic abuser, it’s likely that you experienced the latter. See, abusers ‘select’ who they feel safe revealing their abusive behavior to. They know that their loved ones, who are  heavily invested in them and emotionally bonded to them, will be more likely to protect and defend them, even if they are the victims of the abuse, because victims tend to be traumatically bonded to their abusers. They feel a great deal of power and control being able to unleash their fury onto their victims – without as many repercussions.

Keep in mind that survivors of some of the worst traumas, such as domestic violence, undergo a great deal of stress and the traumatic impact of the abuse has a direct impact on their mind, body and spirit. Yet many of them, with the right tools and resources, as well as professional support, manage to not use their trauma as an excuse to abuse others. In fact, their experiences often ensure that they become extra vigilant about their behavior, in an effort to avoid hurting anyone in the way they’ve been hurt.

The bottom line? We all have stress in our lives. Many of us have undergone trauma that is unimaginable, including being children of narcissistic parents. Some of us may act out or lash out occasionally, or still have trouble managing our triggers from time to time. It doesn’t make us abusive, especially if we take accountability and have taken steps to improve our behavior. However, chronic abusers will use their trauma background as an excuse to be abusive, rather than using that energy to improve their behavior. This differentiates the manipulative abuser from the traumatized survivor. At the end of the day, unless we’re experiencing severe psychosis, the choice to abuse is still always a choice and we are still accountable for it.

Abusers who are aware enough to switch from their abusive behavior to their false mask quickly when there is a witness can choose to change their behavior – as evidenced by their false, charming behavior in the early stages of relationships – they simply choose not to.

5. “I found myself reacting to the abuse, so I must have asked for it.” The myth of mutual abuse is one that even the National Domestic Violence Hotline dispels. It is, for the most part, still a myth. There is often a clear power imbalance between victim and abuser. The abuser is the one who erodes the victim’s identity, beliefs, goals, and dreams, while the survivor becomes increasingly diminished and demeaned. Survivors may exhibit maladaptive reactions to the abuse over time, but there are also plenty of ‘normal’ reactions to abuse that are simply symptoms of trauma. Many survivors may feel confused about talking back to their abuser or feeling bouts of rage, but the truth is that when a victim has been chronically traumatized, it is irrational not to assume that this will have an impact on their behavior or emotional well-being.

Know this: if you are being abused, it’s normal to feel angry and hurt. These are normal, human emotions that arise due to being mistreated – and as many have noted, normal reactions to heinously abnormal and dysfunctional behavior. These emotions are signals that tell you that something is very wrong. It’s important that if you are being abused, you release some of the self-blame and refocus on how you can emotionally detach and safely leave your abuser. The abuse was not and never will be your fault.

This article was first posted on Thought Catalog on December 16, 2016.

All rights reserved. This article is derived from copyrighted excerpts from my book, Becoming the Narcissist’s Nightmare: How to Devalue and Discard the Narcissist While Supplying Yourself. No part of this entry may be reproduced, distributed, or transmitted in any form or by any means, including photocopying, recording, or other electronic or mechanical methods, without the prior written permission of the author. This includes adaptations in all forms of media.

Get my #1 Amazon Bestselling Book, Becoming the Narcissist’s Nightmare.

A #1 Amazon Bestseller in Personality Disorders

Healing Our Addiction to the Narcissist: An Interview with Shahida Arabi on Mental Health News Radio

Self-Care Haven Has Been Featured On

Read my Blog on Psych Central

My Interview on Shakti Journal Magazine 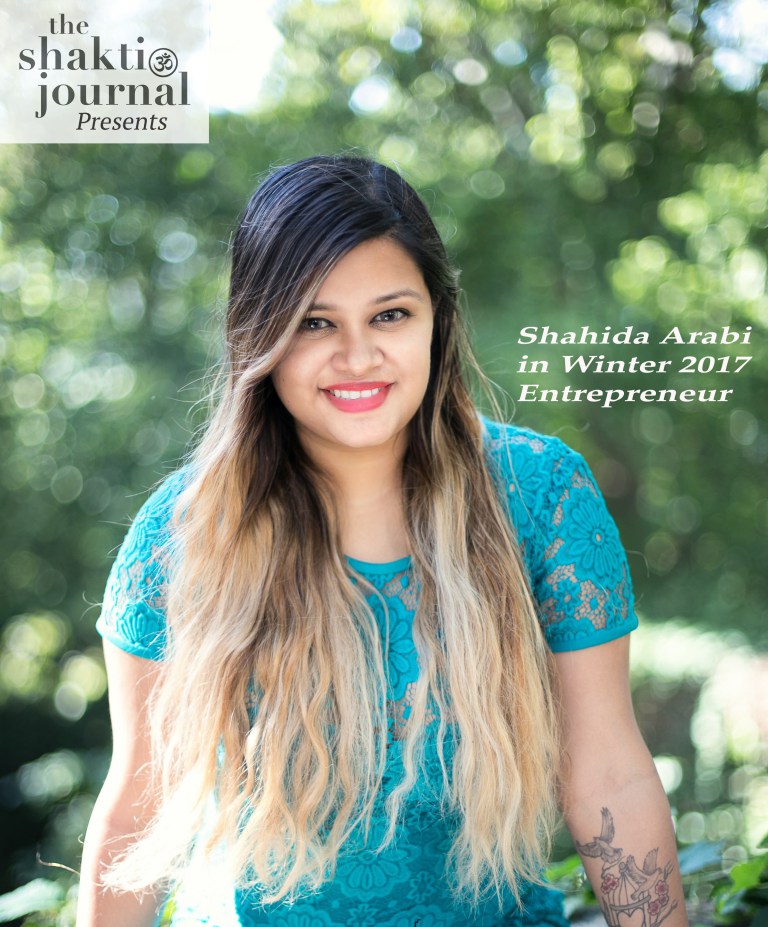 My Interview on The Savvy Shrink

Copyright © 2015 by Shahida Arabi. All rights reserved. No part of this blog may be reproduced, distributed, or transmitted in any form or by any means, including photocopying, recording, or other electronic or mechanical methods, without the prior written permission of the author. This blog and all of its entries are owned by Shahida Arabi and protected under DMCA against copyright infringement.

For Survivors, These Are For You ❤ 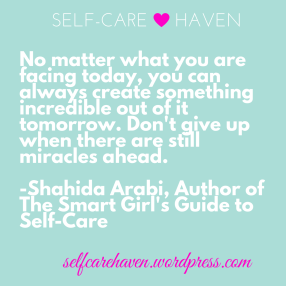 A Love Letter to Abuse Survivors by selfcarehaven.wordpress.com 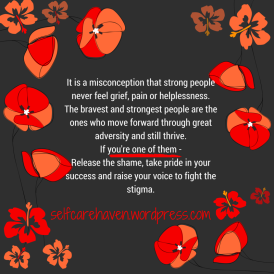 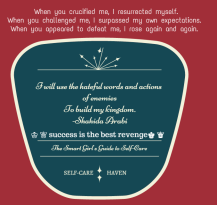 Anchor Yourself to Hope by selfcarehaven.wordpress.com

Pain and Transformation by selfcarehaven.wordpress.com

Crucifixion to Resurrection by selfcarehaven.wordpress.com

Destruction to Creation by selfcarehaven.wordpress.com 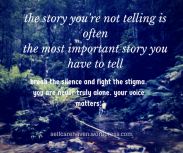 The Most Important Story You Have to tell

Your True Power by selfcarehaven.wordpress.com